The first community pebble mosaic workshop took place at our studio at Gibraltar Point Centre for the Arts, Toronto Island, on December 6, 2010. Ten students began to learn the art by creating a one-foot-square mosaic of a wave pattern. In July 2012, these mosaics were installed in Phase 2 of Willow Square on Ward's Island. They form a large square in front of the soon-to-be renovated Landing Stage, a 24' long Victorian wrought iron structure, planned for installation in the summer of 2013.

There were four more workshops in the beginning of 2011. Any interested graduates then helped to make the 12' diameter central mosaic now installed in front of the Ward's Island Association clubhouse. 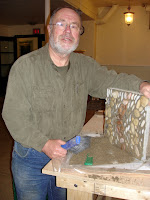 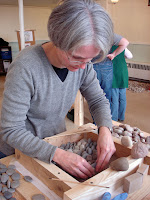 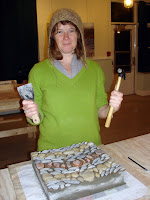 Thanks to Manuel Cappel with help from David Lippett and plans by Alastair Dickson, we had six new workbenches ready for our first pebble mosaic workshop. 10 people signed up and we were ready for December 6 at Gibraltar Point Centre for the Arts.