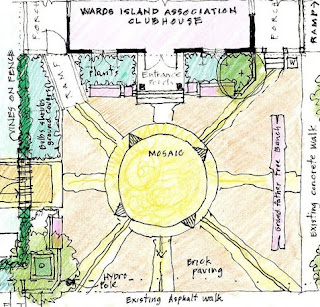 Inspired by the pebble mosaics of friend Maggy Howarth of Cobblestone Designs in England and recognizing the need for a more attractive and functional public space at the heart of our community, a few Toronto Islanders have took on this project on Ward's Island. It involved removing the existing concrete and asphalt in front of the clubhouse and installing a piazza with plants, shade, water, and space for meeting, sitting, and community events. At the centre of the piazza is a pebble mosaic, 12' in diameter, depicting our island. It was be created by islanders over the winter of 2010-11, and installed in the spring of 2011.

Phase 2 of the Willow Square Project was installed in July 2012 and planting in the many new beds began soon after.

The final part of the project involves the restoration of a Victorian landing stage. This wrought iron structure was originally situated beside the Eastern Gap and served as a waiting area for steamboat passengers. It is currently undergoing reconstruction, and will grace the eastern end of Willow Square. We are hoping for installation in the summer of 2013.